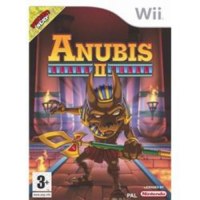 We buy for: £0.25
Sell Wii Games. Get Cash for Anubis II. Long ago, an evil and twisted spirit known as Mumm'hotep plunged the Land of Egypt into Darkness. Many had thought was forever destroyed, but the evil spirit has risen again and taken physical form. A Pharaohs Curse' has been placed over the fastest, strongest and most poisonous of Egypt's inhabitants and is holding his once peaceful civilisation in its hands! The situation has become so terrible that the Gods have called on the only warrior that could rid the sands of these evil monsters and return peace to Egypt… The mighty Anubis. As a consequence of the Pharaoh's curse, all the evil spirits from the Underworld have escaped and are reining terror in the temples and tombs that the ancient Egyptians have laboured so hard to build. You must take control of Anubis, as he embarks on his quest to save Egypt from the terrifying Curse of the Pharaohs'! Along his journey, Anubis will encounter deadly locusts, snapping stone statues, maniac mummies, skeletons and many other monsters from both the Egyptian Underworld and living inhabitants possessed by the evil spirits. Can Anubis overcome the test that has been placed before him and bring peace back to Ancient Egypt…only you hold the power to succeed! Journey through Egyptian Tombs in your search for the Golden Pyramids of Power that will help Anubis complete his quest. In order to move to different parts of the ancient civilization, Anubis must locate and collect the eight Pyramid Orbs, which will activate the Teleporter at the end of each level. The levels are strange and dangerous, and there is always something new to discover round every corner. The levels contain objects that can be pushed, or that are moving or spinning by their own power – be careful of these objects – some will help you finish the levels by carrying you to other places, but others will get in your way! Solve puzzles and progresses through the monster infested Tombs until you reach your goal and confront the evil Mumm'hotep in a FINAL battle that only the hardiest of warriors will reach!