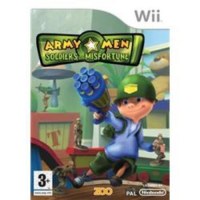 We buy for: £0.75
Sell Wii Games. Get Cash for Army Men Soldiers of Misfortune. Assume the role of Timmy, our mini action hero, and fight the forces of evil in Army Men: Soldiers of Misfortune. Timmy's Tan Army Men action figures have run amok, capturing his Green Army Men, and attempting to take control of his neighbourhood. It\'s up to you to defeat the enemy, save your toys and family, and restore order to your home. The house is your playground as you control a three inch tall Timmy and a slew of toy weaponry to keep his tan Army Men from achieving "Global Home Domination." You'll never look at your toys the same way again. * Battle against the enemy army men by utilising toys you find the house like squirt guns, tennis balls, foam dart guns, and bowling balls. * Five unique missions such as search and rescue, disarming hazards, protection objectives, and eliminating enemy squads each set in different environment. * Timmy will need to utilise vehicles including jeeps, tanks, and airplanes to get around the house.