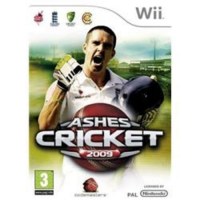 We buy for: £0.15
Sell Wii Games. Get Cash for Ashes Cricket 2009. The Wii edition of Ashes Cricket 2009 will enable up to four players to take to the field in a variety of game modes including the iconic Ashes Series, Test Matches and limited over games including 20 overs. Batsmen will use the Wii Remote to drive, cut, slog and nurdle their way through an innings. When fielding, players will use the Wii Remote to polish the ball, set their field and bowl accurately applying swing/turn to their deliveries in order to take those all important wickets. Ashes Cricket 2009 will also feature a Scenario mode that will pit players against more than 50 match defining moments, such as scoring vital match-winning runs, taking dramatic last-gasp wickets and seeing off the oppositions¿ danger men to succeed. As well as featuring the fully licensed teams from England and Australia, Ashes Cricket 2009 will feature six other Test playing nations as well as ten of the world's most recognisable stadia, including the five featuring in this summer's npower Ashes Series. The authenticity of the experience extends to the game's commentary, which is provided by cricketing favourites Jonathan Agnew, Shane Warne, Ian Botham, Ian Bishop and Tony Greig. * Ashes Mode - Play through the entire 2009 Ashes series with England & Australia * Includes every licensed player, kit, kit items (bats, pads and gloves!) and stadium of the Ashes Series * Legends Mode - let Ian Botham & Shane Warne teach you all the nuances of the sport of Cricket. Coach you through batting, from the basics to shot selcetion, footwork and advanced controls. Coach you through bowling and fielding to the same degree * Match Mode - you control the choice be it ODI, or 20:20, you chose the rules, the no of players, fielding restrictions, powerplays. Set up one off games or custom tournaments. * Online Mode Take your newly acquired cricketing skills and know-how online and show the world what you can do with bat and ball in head-to-head encounters of every discipline