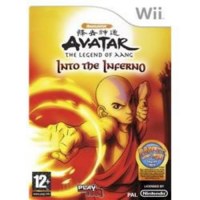 Avatar The Legend of Aang Into the Inferno

We buy for: £0.75
Sell Wii Games. Get Cash for Avatar The Legend of Aang Into the Inferno. Avatar - The Last Airbender: Into the Inferno is an action adventure that follows the plot of season 3 of the highly successful animated TV series. In the game the Fire Nation devises a plot to use the power of Sozin's Comet to rain devastation on the world. The fate of the world lies in the hands of a few young, brave heroes - Aang and his friends - as they prepare for the ultimate showdown against Fire Lord Ozai and his terrorizing army. Features: * Special Combat Moves - Perform explosive martial arts moves of your favourite characters from the TV show. * Exciting New Wii Functionality – Control all four elements (Water, Fire, Air and Earth) using the Wii Remote and Nunchuk. * New Flying Levels – Fly on gliders and explore the expanded Avatar world like never before.