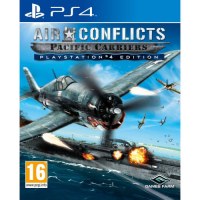 We buy for: £6.05
Sell PS4 Games. Get Cash for Air Conflicts Pacific Carriers PlayStation 4 Edition. Air Conflicts: Pacific Carriers is a historical arcade flight simulation set in WWII. Take your seat in the cockpit and experience intense air combat from both sides of the war. Play as Lucas Stark, a courageous and patriotic admiral in the US Navy, fighting for the ideals of his country in a war that will change him forever. Experience the other side of the conflict in the Japanese campaign, featuring Hideaki Hashimoto, a determined Japanese admiral fighting to conquer the Pacific and bring honour to the holy emperor of Japan and himself. Starting off in command of an aircraft carrier in the Pacific, you will take control of an entire squadron of aircraft, switching between them tactically to manage your ammunition levels and conquer the skies and seas in locations such as Pearl Harbour, Midway and Wake Island. Engage in an in-depth single-player campaign or battle your friends in a highly competitive multiplayer mode. Features: * Experience the story of a carrier: Witness the adventures of Admiral Lucas Stark and Hideaki Hashimoto, the captains of aircraft carriers in the Pacific Ocean in WWII. * Protect your carrier: Take control of the ship's cannon turrets in Survive Mode. * Enter the watchtower: Look out for enemies and discover new missions. * Control whole squadrons: Instead of controlling just one airplane, you can control all aircrafts in your squadron in the respective mission. * Challenging gameplay: Every plane can only be equipped with a limited amount of ammunition, requiring you to strategically switch between the different planes of a squadron. * Choose your weapon: The game contains a total of 3 aircraft carriers, 22 battle ships and 13 aircrafts.