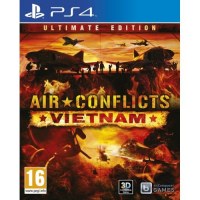 We buy for: £4.02
Sell PS4 Games. Get Cash for Air Conflicts: Vietnam Ultimate Edition. The Vietnam War. The year is 1962. A conflict that was sparked 20 years ago is reaching its peak. Vietnam is a divided country. The communist North is embroiled in a bitter civil war with the anti-communist South. The USA is locked in a cold war with the Soviet Union and, as a demonstration of its interests, decides to support South Vietnam in their struggle against the communist Vietcong troops. Experience the story of Joe Thompson, a courageous US Air Force pilot during the Vietnam War. He is one of the first US soldiers to reach Vietnam. He is young, talented and eager to do his duty. His determination to help his country and thereby help other people dictates his life. Get in the cockpit of fighter jets and helicopters, the war machines that saw action for the first time in the Vietnam War, experience awesome, explosive dogfights and be there with Joe as he goes on his journey to becoming a flying ace. But this war will test him like nothing before. Joe's experiences in Vietnam will change him forever, and scar the relationship with his family watching his deployment from afar. His only contact with them is through the letters they send... Features: • Experience the Vietnam War, one of the most explosive and violent conflicts of all time! Witness the adventures of a courageous US Air Force pilot and of a Vietnamese pilot trying to fight back the invaders. • Not everyone wins in war! Be swept away by the story as you experience heroic moments and the dark side of war. • Brand new missions, custom-designed for helicopter pilots! Along with fighter jet missions there are also special helicopter missions to be completed. • Take control of entire squadrons! Instead of just flying one jet on missions you can control all the planes in your squadron. • A realistic setting combined with Arcade gameplay! Each jet can only carry a limited amount of ammunition. Work around this limitation by switching between planes in a squadron. • A game that never gets boring! Play different single-player and innovative multiplayer modes. • Choose from a vast range of war machines! The game includes over 20 different jets and helicopters.