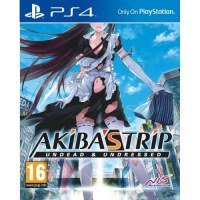 We buy for: £15.24
Sell PS4 Games. Get Cash for Akibas Trip Undead & Undressed. AKIBA'S TRIP: Undead & Undressed is an open-world action RPG in which players undertake numerous missions in a virtual recreation of Akihabara, Tokyo's popular ”Electric Town” district. The player's goal is to identify vampires called “Synthisters” with the help of an in-game smartphone app, then engage them in battle to strip their clothes off so their bodies are fully exposed to sunlight. Boasting a unique combat system in which everyday objects become weapons, multiple story routes, a varied cast of characters based on common anime and video game tropes and a narrative dripping with social satire and subtle nods to Japanese pop culture, AKIBA'S TRIP is a present-day supernatural adventure for the gamer in all of us. What's new in the PS4 version? Toybox Mode – Start the game with one of every available weapon and clothing item, including shirts, blouses, pants, skirts, underwear, and much more! Visual Editor – Using the new Visual Editor, you are able to completely customize almost every aspect of the game's visuals. If you don't feel like making a bunch of little changes, there are tons of pre-set schemes that can instantly change the look of the game for some truly awesome gameplay experiences. Livestream Interaction – Livestream viewers can directly affect the player's experience with chat commands in decidedly unusual ways. Updated Visuals – Enhanced visuals with 1080p resolution, a smooth and consistent frame rate, more character model details, and better lighting and shadows. More Residents – At least four times as many residents wandering the streets of Akiba, giving the city an even more authentic feel than ever before. And less time to load them in! All PS3 and Vita DLC – All downloadable content released for the PS3 and Vita versions is in the game from the very start! Exclusive Dialogue Scenes – Each of the six main girls has one additional dialogue scene added to the PS4 version, accessible by running into her on the street at a specific point of the story. Touchpad and Speaker – Make use of the DualShock 4's wireless controller in various innovative ways. Set game voices to broadcast through its speakers, or get a little more up close and personal with your partner using its touch pad.