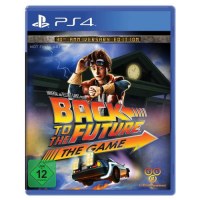 Back to the Future The Game 30th Anniversary Edition

We buy for: £22.39
Sell PS4 Games. Get Cash for Back to the Future The Game 30th Anniversary Edition. The Future is Back and this time its playable! Six months after the events of the back to the future III, the DeLorean Time Machine mysteriously returns to hill valley - driverless! Now, Marty must go back to 1931 to recruit help of a reluctant teenage Emmett Brown in order to save 1985's Doc from certain death. Can they repair the rifts of the past without accidentally erasing the future? * Created in Collaboration with Movie trilogy co-writer and producer Bob Gale. * Features original movie cast members Christopher Lloyd (Doc Brown), Tom Wilson ( Biff Tennen), Claudia Wells (Jennifer Parker), and in special cameo appearances, Michael J.Fox as Mcflys of the past ....and the future! * Includes in-game access to exclusive content: a behind the sceans videa featuring interviews with Bob Gale, Tom Wilson, members of the development team, and AJ Locascio - the voice of young Marty Mcfly. * Your Choices and actions change to story around you. * Includes an exclusive, retrospective behind the scenes video featuring an interview with Bob Gale, and others involved in the creation of the game.