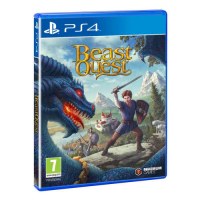 We buy for: £6.05
Sell PS4 Games. Get Cash for Beast Quest. Embark on an epic action-adventure to save the Kingdom of Avantia from ruin. Overcome the dark magic that has corrupted the noble Beasts of the realm. Battle in the mythical world, tackling challenges through stunning landscapes and a plethora of side missions and objectives. Unlock new abilities and upgrades to successfully combat varied opponents. Based on the best-selling fantasy novels, Beast Quest comes to console for the first time ever, with a rich, progressive storyline, vibrant settings, and an excess of compelling challenges. Features: A Sprawling, Epic Journey - Explore spectacular environments on your quest to release the Beasts that are under the dark magic of the wizard, Malvel. Action-Packed Combat - Battle dangerous creatures and take on giant Beasts in boss battles, using swift manoeuvres to dodge, block and attack enemies. Profound Upgrades - Upgrade health, attack and defence through your skill tree, and equip accessories to augment your hero's attributes. A Land of Treasure - Explore snowy peaks and spooky forests, seeking out ancient artefacts and lost fortune. Hundreds of Challenges - Embark on numerous side missions along your journey that reveal the many hidden secrets of Avantia.