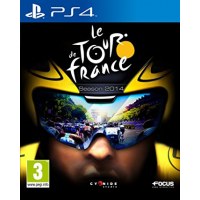 We buy for: £1.76
Wear the jersey of the greatest champion cyclists and take part in a 2014 Tour packed with new features. Enter one of the most prestigious cycling competitions in the world that now takes you through the English countryside, London roads, cobbled sections in northern France, legendary mountain stages and the fabulous finish on the Champs Elysées. This year we have new rider animations, more detailed and enthralling backdrops, reconnaissance of the stages and a brand new and more dynamic descent gameplay in store for you! Finally, the extra Pro Team mode will allow you to compete over several seasons and upgrade your team by recruiting the top champions to ensure that you win the coveted "maillot jaune"! Features: • Take part in an exceptional Tour de France 2014 and compete for the yellow jersey! • Race on stages full of adrenaline where you challenge the greatest champions. • Realistic gameplay to feel all the sensations of a real Le Tour rider! • A complete Pro Tour mode in which you recruit new riders to win the future editions of Le Tour.
PF84
Check out what our customers say Click on any logo to view feedback
Trustpilot