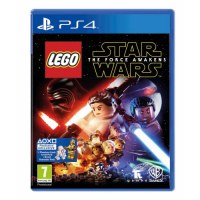 We buy for: £4.51
The No. 1 LEGO videogame franchise returns with a fun-filled, humorous journey through the new Star Wars adventure – and more! LEGO® Star Wars: The Force Awakens marks the triumphant return of the No. 1 LEGO videogame franchise and immerses fans in the new Star Wars adventure like never before. Players can relive the epic action from the blockbuster film in a way that only LEGO can offer, featuring all of the storylines from Star Wars: The Force Awakens, retold through the clever and witty LEGO lens. The game will also feature exclusive playable content that takes players on adventures between Star Wars: Return of the Jedi and Star Wars: The Force Awakens, providing additional insight about the new movie and its characters. Relive the Blockbuster Action – Blast off into a new and improved LEGO Star Wars experience that takes fans deeper into the new film than any other game. Features: • Exclusive New Story Levels – Experience untold adventures set before Star Wars: The Force Awakens through exclusive new story levels. • Variety of Characters, Vehicles & Locations – Play as all of the heroic characters from the movie, while exploring iconic Star Wars locales, such as Jakku and Starkiller Base, and utilising a multitude of vehicles along the way. • Build... and Rebuild – Through the enhanced “Multi-Builds” system, players must choose from multiple building options – to puzzle solve, or just for fun – all advancing the game in different ways. • Exciting New Blaster Battles – Use your surroundings as cover during intense Blaster Battles and drive back the relentless First Order. • Experience the Galaxy Like Never Before – Experience the thrill of high-speed, action-packed flight gameplay like never before. • More “I” in A.I. – Enemy fighters can now build using LEGO bricks to support their fellow Stormtroopers, calling in air support, reinforcements or heavy artillery - taking the fight to the Resistance with the power of LEGO!
PF440
Check out what our customers say Click on any logo to view feedback
Trustpilot