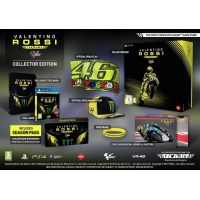 We buy for: £4.51
A unique videogame entirely dedicated to the career of Valentino Rossi, the 9 time World Champion! Experience the career of Valentino from his perspective in a series of 20 challenges from his first race in 1996 up to 2015. Jump into a new career starting at the VR|46 Academy and taking you up to World Champion. During the championship, Valentino will ask you to take part in different events like drifting, flat, R1M-only races, and rally in order to improve his abilities. Features: • Rossi Story - Experience the career of Valentino from his perspective in 20 challenges from 1996 to 2015. • Career - Start from the VR|46 Academy and work your way up to World Championship under the guidance of Valentino. • Game Modes - Test your racing skills in several different race types: Flat Track, Rally, Drift, and R1M-only races. • Online - Prove yourself in the toughest of environments, facing off against up to 12 players. • Roster - Includes all official riders from MotoGP 2016. • 18 official tracks from 2016 season + 5 historical tracks.
PF899
Check out what our customers say
Trustpilot