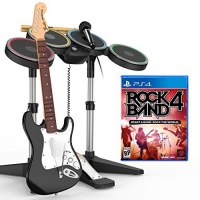 Rock Band 4 Band In A Box

We buy for: £0.00
Music game pioneer Harmonix Music Systems, Inc. is taking the highest-rated interactive music gaming platform to the next level with Rock Band 4. Designed exclusively for current-generation gaming consoles, Rock Band 4 delivers the ecstatic rush of a live band performance like never before. Add your personal signature to every performance through groundbreaking features such as Freestyle Guitar Solos that allow players to create their own legendary solos. Combined with impressive current-gen visual polish and a soundtrack featuring some of rock’s biggest acts, Rock Band 4 aims to create the defining music gaming platform for this generation. YOUR BAND, YOUR STAGE, YOUR WAY. Rock Band’s award-winning gameplay takes the full band and solo-instrument experience to the next level, including innovative new features that empower players to express themselves in ways never before seen in the music category. • Freestyle Guitar Solos – Guitarists can bust out unique guitar solos of their own with the game’s new Freestyle Guitar Solos, no lessons or music expertise needed. Accessible and fun right out of the gate, Freestyle Guitar Solos gameplay features remarkable depth, allowing expert players to string together face-melting licks and craft truly original legendary solos. • Sing for the Moment – Vocalists can sing it their way with advanced pitch recognition that rewards them for putting their own spin on their favourite songs. • Improved Drum Fills – Drummers never miss a beat with latency free Dynamic Drum Fills designed to sound better than ever before. • Work the Crowd – New Stage Presence gameplay allows players to work the crowd into a frenzy by flaunting their charisma and working together with their bandmates for in-game rewards and real-time audience reactions. THE BEST MUSIC GAME EXPERIENCE GETS BETTER. Designed based on feedback from the community, Rock Band 4 builds upon the features that matter most to players, including an immersive new story campaign and ways to make playing with your friends and family easier and more fun than ever. • Start a band. Rock the world – Rock Band 4 features an improved campaign/story experience, allowing up to four players to create and customize their in-game avatars, form a band, and build a legendary rock career.
PF334
Check out what our customers say
Trustpilot