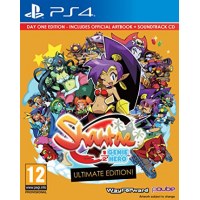 We buy for: £4.51
Iconic genie Shantae is back in her most thrilling adventure yet! The award-winning 2D platforming series levels-up to stunning new heights thanks to an eye-popping new graphical style, an infectious soundtrack and incredible new game features. Transform into different creatures, dance through dynamic, danger-filled stages, complete quests for friends and face-off against awesome screen-filling bosses in an action-packed thrill ride without equal.Features:• The complete package! - This Ultimate Edition contains the award-winning Shantae: Half-Genie Hero, plus three major expansions - Pirate Queen's Quest DLC, Friends To The End DLC and Costume Mode DLC - all in one bumper package!• Incredible visuals! - Eschewing the series' former pixel art look, 2D characters and 3D worlds combine seamlessly in Shantae: Half-Genie Hero for the most beautiful platformer yet.• Peerless adventuring! - Revisit stages with new transformation abilities and morph into a wacky range of creatures (elephants! crabs! mice!) to uncover deeply hidden secrets and unexplored areas.• Play as the full gang! - Shantae's got company! Take control of popular co-stars Sky, Bolo, Rottytops and even series antagonist Risky Boots herself, and use each character's unique skills to journey through new storylines and scenarios long after Shantae's quest is over!
PF1073
Check out what our customers say Click on any logo to view feedback
Trustpilot