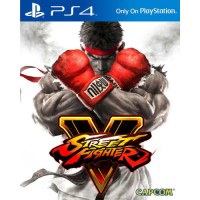 We buy for: £4.51
The legendary fighting franchise returns with Street Fighter V! Powered by Unreal Engine 4 technology, stunning visuals depict the next generation of World Warriors in unprecedented detail, while exciting and accessible battle mechanics deliver endless fighting fun that both beginners and veterans can enjoy. Challenge friends online, or compete for fame and glory on the Capcom Pro Tour. For the first time in Street Fighter history, all post-launch gameplay-related content in Street Fighter V can be earnable via gameplay, free of charge. All balance and system adjustments will be available for free, so players will always have access to the most current version. Additional characters will be continually added, making this the first iteration in the franchise where it’s possible for dedicated players to continue to expand on their gameplay experience without the need to purchase further titles in the series. Street Fighter V will be released exclusively for the PlayStation 4 and PC. Through a strategic partnership between Sony Computer Entertainment Inc. and Capcom, the next generation Street Fighter experience will offer cross-platform play that will unite fans into a centralized player base for the first time ever. The path to greatness begins here: RISE UP! Features: • New and Returning Characters: Birdie and Charlie Nash make their long-awaited return to the Street Fighter universe, where they join newcomer Necalli and classic characters like Ryu, Ken, Chun-Li, Cammy, Vega and M. Bison. Many more new and returning characters will be added to the diverse roster, offering a wide variety of fighting styles for players to choose from. • New Strategies and Battle Mechanics: Highly accessible new battle mechanics, which revolve around the V-Gauge and EX Gauge, provide an unprecedented layer of strategy and depth to the franchise that all players can enjoy. o V-Trigger: Unique abilities that use the entire V-Gauge, giving players the opportunity to inflict damage when activated. o V-Skill: Utility skills (such as evasion) for each character that can be activated at any time. o V-Reversal: Unique counterattacks that use one stock of the V-Gauge. o Critical Arts: Ultimate attacks that use the entire EX Gauge. • PS4 and PC Cross-Platform Play: For the first time in franchise history, the online community will be unified into a single player pool, allowing for even more rivalries to be born. • Next Gen Visuals: Unreal Engine 4 technology pushes the realism and next-gen visuals to new heights, making this latest entry the best looking and most immersive Street Fighter game of all time.
PF207
Check out what our customers say Click on any logo to view feedback
Trustpilot