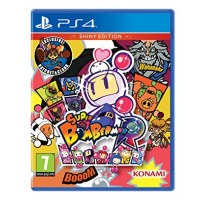 We buy for: £7.32
In SUPER BOMBERMAN R, up to two players can work cooperatively in 'Story' mode to clear stages in order to save the galaxy. Guide a wide variety of Bomber man characters around maze-like areas using timed bombs to open walkways and take out opponents. Multiply the fun and play with up to eight players in 'Battle' mode, or jump into the competitive Grand Prix mode. Grand Prix is a team-versus-team mode that pits two teams of up to 3 players each who battle it out in different arena stages using characters with special abilities.Features:• Get the Ratchet & Clank Bomber - Exclusive to PlayStation 4.• The Shiny Edition includes: 8 Shiny Bomberman Brothers Set & Golden Vic Viper Bomber. • 8 Player Battle Mode, Online and Local Play! • Face huge bosses in exciting battles! • Enriched story with all-star voice actors.
Check out what our customers say
Trustpilot