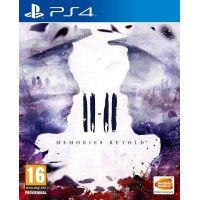 We buy for: £1.32
Sell PS4 Games. Get Cash for 11-11 Memories Retold. 11th November 1916, a young photographer leaves Canada to join the Western Front in Europe. The same day, a German technician is told that his son is missing in action on the front. They will discover the reality of war, crossing paths, on the front, and the rear, trying to preserve their humanity for their loved ones in the face of disastrous events… if they can come back. At 11am the 11th Day of the 11th Month of year 1918, they will face the biggest decision of their lives. This is the moving story of the end of World War One. Features: * A 3D Animated Painted Adventure: Brought to you by the multiple award-winning studio Aardman, World War One has never found a more beautiful canvas to be told. With great artistic sensibility, each locale you visit will let you explore a striking and living painting. * A Memorable Story: Live a moving story inspired by the real events where you play on the two sides of a complex historical event that will confront you with the realities of war at the front and the rear but most importantly what men are really made of. * Intertwined Destinies: Kurt and Harry have different motives but a common fate. While Kurt enrolled in the hope of finding his son missing in action, the young and idealistic Harry left his native Canada looking for adventure. Each of their actions will bring them closer to the biggest choice of their lives.