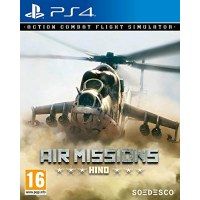 We buy for: £8.25
Sell PS4 Games. Get Cash for Air Missions Hind. Air Missions: HIND is an action combat flight simulator revolving around the Russian Mi-24 Hind assault helicopter, a.k.a. the "Flying Tank". You'll be deployed to the battlefield either alone in Singleplayer, or together in online Multiplayer. Equip the weapons of your choice - UPK 23 machineguns, GUV gun pods, FAB bombs, and a variety of missiles - and use them to tear up the skies above Central Asia, Eastern Europe, the Arctic Ocean & Southeast Asia! Features: * Soar through the skies in an Mi-24 Hind assault heli, a.k.a. Flying Tank. * Fight in Singleplayer and Multiplayer - Deathmatch, Instant Action & Online Co-op. * Hover over Central Asia, Eastern Europe, the Arctic Ocean & Southeast Asia. * Equip devastating weapons and missiles, such as GUV gun pods and FAB bombs. * Master your aircraft with three different helicopter control difficulty levels.