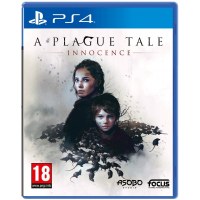 We buy for: £10.34
Sell PS4 Games. Get Cash for A Plague Tale Innocence. A Plague Tale: Innocence will offer an adventure supported by an original scenario, with gameplay that blends action, adventure and stealth phases. Follow our protagonists Amicia and her little brother Hugo, both orphans and on the run from the terrifying Inquisition. Our young heroes will also need to survive against an even greater danger: supernatural swarms of rats that appeared with the great plague infecting across cities and countryside. Features: * An original story featuring two young orphans on the run from the Inquisition during the Great Black Plague. * A gameplay that blends action, adventure and stealth phases. * Survive against deadly swarms of rats ravaging everything in their path.