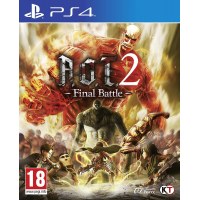 We buy for: £26.24
Sell PS4 Games. Get Cash for A.O.T. 2 Final Battle. A.O.T. 2: Final Battle builds on the fast-paced action the series is famous for, and features an abundance of new and exciting gameplay mechanics. Not only does this package feature the events of Season 1 and 2 of the Attack on Titan anime series through the point of view of a custom character (A.O.T. 2), but it includes the pivotal plot of Season 3 through many fan-favourite character's points of view. Strap on your omni-directional mobility gear and prepare to confront all of the conflict of the popular anime series like never before. Features: * Fight through Seasons 1-3 of the popular anime series with over 40 playable characters with several playable for the first time in A.O.T. 2: Final Battle. * Reclaim the lands outside the wall back from the Titans in the new 'Wall Reclamation' mode! Create a squad of your favourite characters to head out into battle and face their Titanic foes. * Equip the frenetic anti-personnel combat gear to fight against human foes - Titans aren't the only threat in Season 3's enthralling narrative.