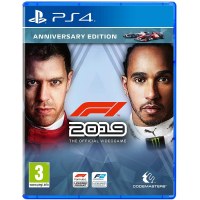 We buy for: £20.74
F1 2019 features all the official teams, drivers and all 21 circuits from the 2019 season. This year sees the inclusion of F2 with players being able to complete the 2018 season with the likes of George Russell, Lando Norris and Alexander Albon. Having established itself as one of the highest rated racing franchises of all time, F1 2019 builds on the success of previous iterations and delivers an experience that rivals the quality and production values of its real-life race counterpart. With greater emphasis on graphical fidelity, the environments have been significantly enhanced, and the tracks come to life like never before. Night races have been completely overhauled creating vastly improved levels of realism and the upgraded F1 broadcast sound and visuals add further realism to all aspects of the race weekend.Features:• Defeat your Rivals - Go head to head with the biggest rivals in both F2 and F1.• F2 mode and Career Story - Establish your reputation and defeat your rivals in the F2 Story Mode before stepping into the full F1 2019 Championship.• Esports Integration - F1 2019 features an in-game esports area giving players the latest news and highlights from the F1 Esports Series.• Enhanced visual fidelity - Stunning new night lighting, uplifted environments and upgraded F1 broadcast rebrand visuals gets you even closer to the action.• Multiplayer - New League functionality allows players to find and create their own tournaments, compete in weekly challenges and customise a 2019 F1 Regulation Car.
PF1560
Check out what our customers say Click on any logo to view feedback
Trustpilot