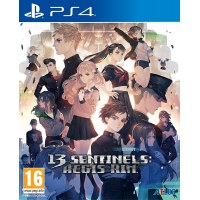 We buy for: £13.59
Sell PS4 Games. Get Cash for 13 Sentinels Aegis Rim. Vanillaware, the storytellers behind Odin Sphere and Dragon's Crown, craft a sci-fi mystery epic spanning thirteen intertwining stories. Uncover the truth and delve into a 2D side scrolling adventure featuring gorgeous art and environments. Then, battle the kaiju in fast-paced, top-down combat. Customize the Sentinels with an arsenal of Mechsuit weaponry, and fight to defend humanity! Features: * Beautifully rendered in Vanillaware's signature hand-painted visual style. * Uncover a deep story through visions of the past and the future. * The doomsday clock is ticking. Become a Sentinel pilot, customize your mech, and fight waves of kaiju in top-down tactical combat.