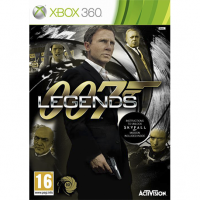 We buy for: £1.32
Sell Xbox 360 Games. Get Cash for 007 Legends. Celebrating the Bond franchise’s 50th anniversary, the latest instalment in the video game series – 007 Legends –launches gamers back through time to relive a selection of James Bond’s most iconic and intense undercover missions from the popular films. A first-of-its-kind Bond video game, 007 Legends features an original, overarching storyline inspired by six classic Bond movies, including this year’s highly-anticipated 23rd instalment – SKYFALL, to offer the most diverse Bond gaming experience yet! Delivering the action that gamers expect from a Bond game, 007 Legends equips players with state-of-the-art spy gadgets, an arsenal of weapons, and sleek vehicles as they jet off to exotic locations and utilize Bond’s unmatched combat abilities, quick wits, class and style to take down notorious villains and their brutal henchmen, perform impressive stunts, and of course…gorgeous Bond women. • Six Classic Bond Films, One Incredible Game – 007 Legends features an innovative storyline that finds the world’s top Mi6 agent, James Bond, in a critical situation, flashing back to his most intense encounters from six popular Bond films, including this year’s upcoming Daniel Craig film – SKYFALL. • Be the spy, Live the Adventure – Using sharp investigative and surveillance skills and equipped with unparalleled quick wits, physical abilities, and state-of-the-art gadgets and weaponry, players will take on stealth-based mechanics and dynamic free-form melees in a wide range of secret agent objectives, including assault, espionage, elimination and defence operations like a real covert operative. • By Air, Land and Space – Each mission in 007 Legends brings with it a fast-paced and exciting vehicle-based gameplay segment, where players can chose between taking complete control and driving like only James Bond knows how to drive, or opt for a guided cruise control-style experience in order to focus on using weapons and gadgets to take down pursuing enemies. • Take on the Missions Alone or Together – The fan-favourite single-player Mi6 Ops Missions, which debuted in GoldenEye 007: Reloaded, returns in full-force in 007 Legends to challenge players to complete all-out action, stealth and gadget-based missions and compete for the highest online leader board scores. The game also features a robust James Bond multiplayer experience, including local four-player split-screen game modes and 12-player online competitive gameplay with new maps, weapons, characters and gameplay modes – even the ability to play as one of Bond’s allies or nefarious foes.