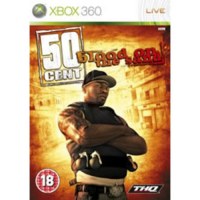 50 Cent Blood on the Sand

We buy for: £13.04
Sell Xbox 360 Games. Get Cash for 50 Cent Blood on the Sand. 50 Cent: Blood on the Sand puts gamers in the role of 50 Cent and features intense 3rd person action shooter gameplay, online drop-in and drop-out co-op multiplayer, brawler combat with interactive counter-kills, along with vehicle and helicopter combat. Developed by Swordfish Studios using the Unreal 3 game engine technology, 50 Cent: Blood on the Sand will also include eighteen exclusive new 50 Cent tracks, as well as previously released songs and music videos. The game will feature the voices and likenesses of 50 Cent and G-Unit's Lloyd Banks, Tony Yayo and DJ Whoo Kid.