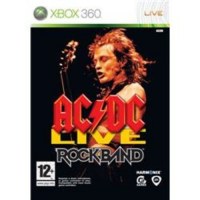 We buy for: £2.10
Sell Xbox 360 Games. Get Cash for AC/DC Live Rockband. AC/DC LIVE: Rock Band Track Pack is a fully-featured, standalone extension to the multi-million unit selling, genre-defining, cultural phenomenons Rock Band and Rock Band 2, the ultimate social music game experiences. AC/DC Live lets you and your friends relive AC/DC's epic 1991 live performance at Donington, UK, through the eyes of Brian Johnson, Angus Young, Malcolm Young, Cliff Williams, and Chris Slade. Features include: - Play your favorite hard-rockin' classics, or jump right in and conquer the entire 18-song set! - All of your favorite modes return - solo and band tours, tug-of-war, score duel, and even practice mode. - Rock Band's trademark guitar, bass, drums, and vocals put you right onstage where the action is! - You can use your Rock Band or Rock Band 2 peripherals to create the ultimate music game experience - you can tap out guitar solos with the 2nd set of frets at the top of your guitar neck, freeform drum fill your way through drumming sections, or use freestyle vocals to express yourself while belting out AC/DC classics. - Go Beyond the Disc! - The Xbox 360 version ships with a code on the back of the game manual that lets you import all of the songs into the Rock Band or Rock Band 2 game environment (Internet connection required).