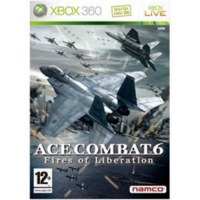 We buy for: £2.10
Sell Xbox 360 Games. Get Cash for Ace Combat 6 Fires of Liberation. With over 10 million copies sold worldwide, the ultimate flight action series soars onto Xbox 360! This Christmas, the entire Flight Action genre will be single handedly redefined as Ace Combat 6, the latest in the No.1 flight action series arrives on the next generation console system to continue its absolute domination. * Witness the HD graphics rendering the world around you into photo-realistic war zones! * Command the allied assault force of aerial, naval, and ground combat units: Issue commands with split-second precision and witness the massive combined assault! * Engage in fierce combat at an unprecedented scale and intensity: Massive conflicts unfold on a "living battlefield" integrated by the "Dynamic Operation System" where up to 6 independent battles can break out at once at multiple locations. * Prove your supremacy on a global scale in the intense multiplayer online mode via Xbox Live: For the 1st time in the Ace Combat series, several modes of online play including classic death match style missions and co-op! * Pilot the authentic licensed combat aircraft of your dreams: Get in the cockpits of authentically detailed aircrafts from various air forces such as the F-15 E Strike Eagle, F-22 Raptor, and Tornado for the most realistic flight combat action. * Enjoy an action packed ace pilot experience of unsurpassed quality: Seamless pacing and intuitive controls provide an immersive and stress-free gaming experience. * Experience the intense drama and emotions of the battlefield: Become entangled in an authentic war drama told from the perspectives of 7 main characters.