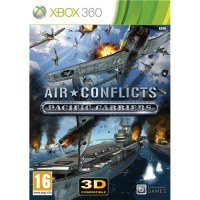 We buy for: £7.32
Sell Xbox 360 Games. Get Cash for Air Conflicts Pacific Carriers. Air Conflicts: Pacific Carriers is a unique flight simulation with strategy elements and a compelling storyline. The game is focused on aircraft missions during WW2 that are started from aircraft carriers. Choose your side: US Navy vs. Japanese Imperial Navy. Features: * Experience the story of a carrier! Witness the adventures of Admiral Lucas Stark and Hideaki Hashimoto, the captains of aircraft carriers in the Pacific Ocean in WW2. * Protect your carrier! Take control of the ship's cannon turrets in Survive Mode. * Enter the watchtower! Look out for enemies and discover new missions. * Take control of whole squadrons! Instead of controlling just one airplane, you can control all aircrafts in your squadron in the respective mission. * Equip your airplanes with real weapons! All possible plane-weapons-configuration is based on real models. * A real setting combined with arcade gameplay! Every plane can only be equipped with a limited amount of ammunition. You can avoid this restriction as you switch between the different planes of a squadron. * A game that never gets boring! Play multiple single player and innovative multiplayer modes. * Experience the most famous WW2 battles! Be in the heart of battles like Midway, Pearl Harbor and Wake Island. * A huge war machinery for you to choose from! The game contains a total of 4 aircraft carriers, 21 battle ships and 12 aircrafts.