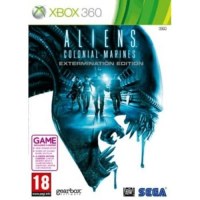 We buy for: £0.50
Sell Xbox 360 Games. Get Cash for Aliens: Colonial Marines Extermination Edition. Aliens: Colonial Marines begins with an ostensibly abandoned ship, the U.S.S. Sulaco, recovered in orbit around LV-426. Players lead a group of highly trained United States Colonial Marines as they board the deserted craft to uncover the fate of the crew. They will have to fight to survive unspeakable horrors and their own anxieties as they chase down the truth behind a galaxy-spanning deception that places humanity at the mercy of the most murderous and deadly species in the universe. Aliens: Colonial Marines features authentic environments, such as the surface of LV-426 and Hadley’s Hope, weapons inspired by the film series and is designed to provide an exhilarating and engaging new chapter in the Aliens universe.