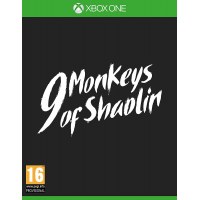 We buy for: £4.02
Sell Xbox One Games. Get Cash for 9 Monkeys of Shaolin. 9 Monkeys of Shaolin marks a true rebirth of the iconic brawler genre in vein of old-school video games. As a mere Chinese fisherman Wei Cheng, you have to avenge the death of your friends and family slaughtered in a pirate raid at your peaceful village. The games' protagonist is quite a tough nut to crack as he knows the basics of ancient martial arts only mastered by legendary Shaolin monks. Get your trusty battle staff ready for a challenging adventure in Medieval China and for merciless fights with hordes of various enemies. Action-packed battles, user-friendly controls and incredible atmosphere of great kung-fu movies of the 70's - all of this makes 9 Monkeys of Shaolin a perfect choice for every true fan of really hardcore brawlers. Features: * 3 Unique Fighting Styles - Fight on earth, in the air or use mysterious magic seals. Combine these elements to defeat every enemy on your way. * Stunning Visual Style - Unlikely combination of historical and mystical elements gives you an exciting experience from every scene to appear on screen. * More Than 25 Different Levels - Chinese villages, pirate ships, Buddhist monasteries, Japanese mansions, ancient ruins and many more. * Captivating Narrative - Discover the fascinating story of Wei Cheng and follow him as he rises from a simple fisherman to the master of Shaolin martial arts. * Co-Op Play - Invite your friend to help you fight through growing waves of enemies and complete the game together. * Extensive Character Development System - You learn a great deal of ways to victory as you discover various unlockable perks, items and fighting styles.