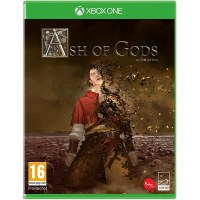 We buy for: £1.05
Sell Xbox One Games. Get Cash for Ash of Gods Redemption. Ash of Gods: Redemption is a mix between a roguelike role-playing visual novel and an online turn-based strategy game. This is a story intending to show all the complexity and ambiguity of moral choices. Good people often become rascals while Inhumans behave more human-like than humans themselves. This is the story of "angels" who, after being given freedom, turned the life of humans into hell in the absence of God. This is a novel that shows you that no conflict has a right or wrong side, because even your enemies have mothers and children. Features: * Roguelike storytelling: Rich and unpredictable story with 3 main characters each with different fate and duty. A truly non-linear storytelling with 7 completely different endings. * Deep turn-based combat system: The combat system was designed to enrich the player experience and force them to risk their team members in order to win the battle.Incredible art style: The dark fantasy world of Ash of Gods is a visually incredible place with amazing characters and stories. * Soundtrack by Adam Skorupa: All tracks written by Adam Skorupa and Krzysztof Wierzynkiewicz.