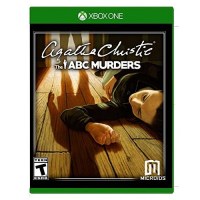 We buy for: £4.51
Sell Xbox One Games. Get Cash for Agatha Christie The ABC Murders. Adapted from the classic Agatha Christie novels, 'The ABC Murders' is an adventure and investigation game, offering sharp-minded gamers the chance to step into the shoes of Hercule Poirot. Join the famous detective as he attempts to unmask the elusive murderer known as ABC' by solving puzzles, and exploring crime scenes, rendered stylishly in cel-shaded, real-time 3D. To solve the case, players will have to talk to characters, gather evidence and solve challenging puzzles in order to collect clues and piece together the mystery in order to bring this murderer to justice. Features: * An intricate and celebrated storyline adapted from the classic Agatha Christie novel, providing hours of gameplay. * The classic novel brought to life with full voice acting and vibrant, cel-shaded 3D graphics. * Study crime scenes and solve puzzles to uncover the clues you need to solve the mystery of 'The ABC Murders'. * Interact with a number of witnesses and allies, and choose how you want to interrogate suspects. * Observe an important witness or a potential suspect closely in order to understand their state of mind. * Recreate the murders by visualising them and changing details in real time to establish the facts behind the crime. * Use your 'little grey cells' and combine clues to gain knowledge and insight into the mystery. * Hint and assistance system enables players to bypass tougher sections to experience the story at a more accessible pace. * Secrets are hidden everywhere - you'll need all your wits about you to find and solve them all!