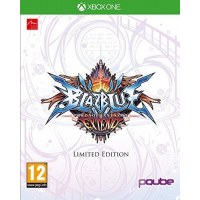 We buy for: £4.51
BlazBlue Chronophantasma Extend is the definitive instalment of the renowned 2D fighting game franchise developed by ARC SYSTEM WORKS! Chronophantasma Extend has a whole host of new features, including the playable Celica A. Mercury and the re-introduction of Lambda to the character roster. Expanded story mode scenarios The Rat, Determination, and Collision, focus on Bullet, Kagura, and Kokonoe respectively, in addition to an all new story mode that covers the events of Remix Heart named Remix Heart Gaiden. For online network modes, players can now create 'My Room', a virtual hang out space that can be furnished with decorations and furniture earned by spending in-game currency. An enhanced online network system allows up to 64 players per lobby. BlazBlue Chronophantasma Extend includes download content from BlazBlue Chronophantasma. Features: • The largest roster yet - 28 characters including fan-favourite Lambda and the newly-playable Celica A. Mercury! • Introducing My Room - a uniquely customisable player lobby that can be furnished with adorable decorations and personal furniture! • Three new story modes that focus on Bullet, Kagura, and Kokonoe, and a retelling of the Calamity Trigger and Continuum Shift stories! • Experience an all-new story based on the popular manga in Remix Heart Gaiden and enjoy eight hilarious new gag reels! • Take the fight online in expanded player lobbies that can support up to 64 players!
XO301
Check out what our customers say Click on any logo to view feedback
Trustpilot