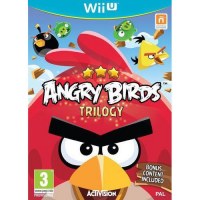 We buy for: £9.79
Sell Wii U Games. Get Cash for Angry Birds Trilogy. Angry Birds is now crashing in on the Wii and Wii U systems—gather your flock and sling into action! Completely remastered for the big screen with crisp, amazing new graphics, Angry Birds Trilogy migrates to Wii and Wii U consoles with new, hilarious animated cinematics. Get the original Angry Birds, Angry Birds Rio, and Angry Birds Seasons, plus hours of added built-in levels, and access to even more—over 260 levels of downloadable content—for nonstop slingshot Angry Bird action. Features: * Three best-selling Angry Birds games in one. * Over 140 total hours of addictive gameplay. * 30 episodes on disc, including hours of new levels * Over 800 Levels, Including 19 exclusive ones.