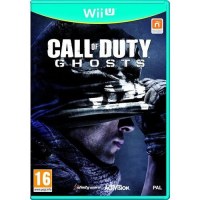 We buy for: £4.51
Sell Wii U Games. Get Cash for Call of Duty Ghosts. Call of Duty: Ghosts is an extraordinary step forward for one of the largest entertainment franchises of all-time. This new chapter in the Call of Duty® franchise features a new dynamic where players are on the side of a crippled nation fighting not for freedom, or liberty, but simply to survive. Fuelling this all new Call of Duty experience, the franchise's new next-gen engine delivers stunning levels of immersion and performance, all while maintaining the speed and fluidity of 60 frames-per-second across all platforms. Call of Duty: Ghosts Single Player Campaign. * Ten years after a devastating mass event, America's borders and the balance of global power have changed forever. As what's left of the nation's Special Operations forces, a mysterious group known only as "Ghosts" leads the fight back against a newly emerged, technologically-superior global power. * A New Call of Duty Universe: For the first time in franchise history, players will take on the underdog role with Call of Duty: Ghosts; outnumbered and outgunned, players must fight to reclaim a fallen nation in an intensely personal narrative. Gamers will get to know an entirely new cast of characters and visit locales in a changed world unlike anything seen in Call of Duty before. Call of Duty: Ghosts Multiplayer. * In Call of Duty: Ghosts you don't just create a class, you create a soldier, a first for the franchise. In the new Create-A-Soldier system, players can change the physical appearance of their soldier by choosing the head, body type, head-gear and equipment, and for the first time in a Call of Duty game, the player can also choose their gender. With 20,000 possible combinations, this is the most flexible and comprehensive character customization in Call of Duty history. * New dynamic maps are the evolution of multiplayer.