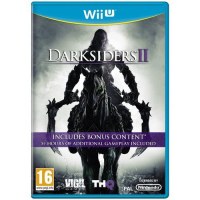 We buy for: £3.05
Sell Wii U Games. Get Cash for Darksiders II. Awakened by the End of Days, Death, the most feared of the legendary Four Horsemen, embarks on a quest to undo Armageddon. Along the way, Death discovers that there are far worse things than an earthly Apocalypse, and that an ancient grudge may threaten all of Creation. Become the terrifying force which everything fears but nothing can escape. Death Lives, in Darksiders II. Additional Content for the WiiU: The WiiU version of Darksiders II includes a selection of Bonus Content not included on the disc for the other formats. This includes: * Argul's Tomb – The game's first downloadable content pack featuring a unique area, three new dungeons and new weapons and armour to collect. * Death Rides Pack – Three new side-quests for the Darksiders II campaign. * Angel of Death & Shadow of Death packs – New legendary armour and weapon choices for the player early in the game. * Deadly Despair Pack – Upgraded horse speed boost. * Additional unique legendary weapon and armour sets for the player to use from the start of the game. Key Features: * Play Death – Become the most feared of the legendary Four Horsemen, able to destroy entire worlds and battle forces beyond Heaven or Hell. * Epic Universe – Unlike anything the player has seen before, delivered in the unique style of Joe Mad. * Player Choice & Customization – Thousands of weapon and armour items, three diverse specialisations, along with customizable Harbinger & Necromancer Skill Trees allow players to create their own Death. * Replay-ability – Side quests, vast open world, endless equipment combinations, Skill Tree customization and levelling system offer compelling reasons to play through Darksiders II again and again. * Traversal – Death is a nimble and agile character capable of incredible acrobatic feats allowing the player to explore the world like never before. * Unique Wii U Game Pad Functionality – Play Darksiders II like never before using the Wii U Game Pad screen to instantly access inventory and abilities.