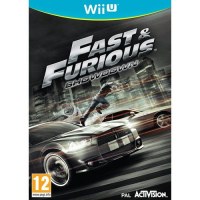 We buy for: £22.39
Sell Wii U Games. Get Cash for Fast & Furious Showdown. In true Fast & Furious form, players will get behind the wheel of the some of the hottest vehicles and race across epic locations around the globe. Players can team up through two-player co-op, and take part in a collection of high-stakes driving missions. The game provides the ability to switch between key roles from driver, gunman, tactician, to daredevil. Players can also build and modify their dream car with a variety of fantastic upgrades and performance perks. Also included is a Challenge Mode in which players can test their skill at completing over-the-top objectives and an online leader board allows racers to compare challenge scores with friends and gamers around the world for ultimate bragging rights. Become a part of the crew! Strap in and get ready for an intense ride as you team up to take down a dangerous international gang that can only be stopped by you and the rest of the Fast & Furious crew. Features: • Team Action Racing: Get behind the wheel of some of the world’s most intense rides and take on high-stakes driving missions cooperatively with a friend or computer A.I. • Choose the Experience: Put skills to the test in Challenge Mode, an over-the-top game mode offering addictive objectives and high re-playability. • Diverse and customisable cars: Build your dream car and modify it with more than 50 awesome upgrades and performance perks. • Storyline that spans the franchise and travels the globe: Heists, hijacks and mayhem combine across 8 epic global locations, from Rio to LA to Moscow, in an original storyline that spans the entire Fast & Furious film franchise.