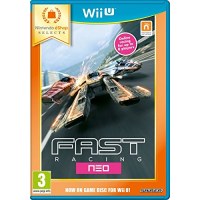 We buy for: £14.14
Sell Wii U Games. Get Cash for Fast Racing NEO. Jump into the driver’s seat of an assortment of anti-gravity vehicles, then put them through their paces in high octane competitions at 60 frames per second. Try to become a legend by besting all three of FAST Racing NEO’s leagues, each of which ramps up the competition… and the speed! Tear through 16 winding, twisting tracks that showcase stunning locales and realistic weather conditions. Skid along the ice as your cockpit view is buffeted by heavy snowstorms, weave between skyscrapers in a rainy high-tech metropolis, and watch out for sandstorms that can blow you off course! Use either motion or traditional controls to steer around tight corners, weave around obstacles and soar over hazardous jumps. By changing your ship’s phase you’ll change its colour which, when matched with the coloured boost panels on the ground, gives you a quick burst of speed! You can even race on the Wii U GamePad screen with off-TV play. Racers can find even more competition waiting for them in FAST Racing NEO’s multiplayer modes: take on up to seven other players online, compete locally with three other players in split-screen local multiplayer, and pit your best lap times against an online leaderboard. Think you can handle speeds like this? Find out in FAST Racing NEO, an adrenaline-pumping arcade racer for Wii U. Features: • Race anti-gravity vehicles in this lightning-fast arcade racer. • Zoom through 16 tracks set in canyons, alpine peaks, oceans, futuristic cities and more. • Master the art of boosting and phase switching to stay ahead of the competition. • Go head-to-head in online multiplayer for up to eight players. • Compete on the couch in four-player split-screen local multiplayer.