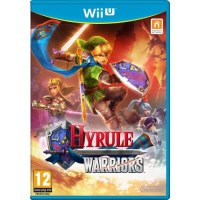 We buy for: £3.05
Sell Wii U Games. Get Cash for Hyrule Warriors. Cut down entire legions of enemies as Link, Zelda, Midna, and other characters from The Legend of Zelda franchise using over-the-top powerful Dynasty Warriors-style moves. This tour de force through the beloved locales of Hyrule will have players battling some of the fiercest enemies in The Legend of Zelda history. Two players can play local co-op, with one player joining with the Wii U GamePad controller and another with the Wii U Pro Controller or Wii Remote and Nunchuk controllers (additional accessories are sold separately). Features: * The delicate balance of the Triforce has been disrupted and Hyrule Kingdom is once again being torn apart by a dark power, this time led by Sorceress Cia. * Heroic Link carves through a huge onslaught of enemies as he executes flashy moves with combat attacks. This also marks the first time that many other iconic characters from The Legend of Zelda franchise are playable for any length of time, including Princess Zelda, Impa, and Midna. * Protect and reclaim recognisable landmarks from multiple games in The Legend of Zelda series, including such classic areas like Hyrule Field and the Palace of Twilight. * Push back armies of classic enemies from The Legend of Zelda, as well as powerful enemies making their debuts in Hyrule Warriors. * Advance the story to unlock new playable characters, each with unique moves and weapon types. Collect Rupees and other useful items to upgrade weapons and craft badges, which players can use to bolster each warrior's abilities. * Two warriors are better than one: Battle armies with a friend using local co-op mode, with one person playing on the TV and the other on the GamePad, providing each player with his or her own screen.