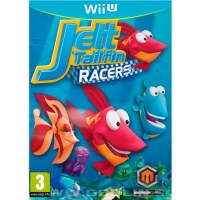 We buy for: £22.39
Sell Wii U Games. Get Cash for Jett Tailfin. Enter this magical underwater world and win the coveted Shark Trophy in the intense hi speed racing game! Face the challenges of the Deep where fish fear to swim! Train and master the use of weapons and magical power boosts to win and become Top Fin! Features: * Run the tracks! Run through unique underwater environments with stunning visuals and challenging tracks! * Tropical Islands – A tropical island full of coral reefs, colourful fish and golden sand. Its clear blue water hides dangerous enemies and can be quite challenging. * Pirate's Islands – This old island of lost treasures can be as dangerous and menacing as the pirates that once lived there. Go through hidden tunnels, avoid a school of ferocious sharks and get your great treasure: the winner trophy! * Atlantis – The greenish waters and purple crystals sets the beauty of this exotic place that is thought to be the remains of Atlantis. Finding your way through the ruins isn't so easy, since you need to avoid the ferocious sharks on the track. * Ship Graveyard – Massive Rusty metal sunken ships surrounded by murky waters makes this course one of the most challenging of the race! A maze course inside the tanks of great cargo ships and the rooms of decadent luxury liners. * Escape the enemies! Jett Tailfin brings home speed racing with an underwater twist! You must escape from the dangers of the sea while racing to be Top Fin! * Shark – Beware of the Sharks as they can be scary! If you see one, swim away as fast as you can! * Sharks also make sure you follow the course! * Sting Ray – Don't bother these guys! They will get annoyed and chase you! * Find your buddies! Your buddies can help you, but you have to free them from being trapped inside floating barrels scattered throughout the course. There are three weapon buddy families each withdifferent abilities. After you free them, they will help you trap or slow down the other racers! * Often called “weapon buddies”, they are a great part of the fun of Top Fin racing! * Octopus – These buddies specialize in stopping or slowing down the other racers by using their sticky tentacles or releasing a black ink cloud. * Electric Eels – These guys are fast and love to chase racers! Eel buddies can fire electric bolts at other racers or they can create a protective force field around you! * Blowfish – Watch out for these guys! Their needles can be pretty useful in slowing down a racer. They can also get more friends and create a mine field behind you!