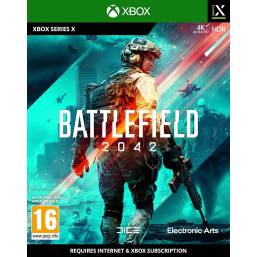 We buy for: £8.25
Sell "Battlefield 2042" on Xbox Series X for Cash, See your Price Above. Battlefield 2042 is a first-person shooter that marks the return to the iconic all-out warfare of the franchise. In a near-future world transformed by disorder, adapt and overcome dynamically-changing battlegrounds with the help of your squad and a cutting-edge arsenal. Battlefield 2042 brings unprecedented scale on vast environments across the globe. Players will take on several massive experiences, from updated multiplayer modes like Conquest and Breakthrough to the all-new Hazard Zone.A World Transformed by Disorder!In 2042, extreme weather events and resource conflicts have shifted the balance of global power. The United States and Russia stand at the brink of war, while a mix of Non-Patriated combat veterans form independent groups known as Task Forces. Fight to define the future in this never-before-seen theatre of war.Features: Vast and Dynamic Environments! Get an even greater sense of spectacular, large-scale war on seven massive maps – crafted through a revamped design philosophy. Each battlefield has multiple distinct combat areas housed in a single playspace and this extra space means more variety and more meaningful vehicle gameplay – tanks have more space to roam, fighter jets have more airspace to manoeuvre. On these maps, you'll experience ever-changing battle conditions and gameplay challenges. Adapt on-the-fly to dynamic events and disasters, such as sandstorms in the deserts of Qatar, a rocket launching from French Guiana’s Space Centre, and tornadoes threatening South Korea’s concrete jungles. New Seasons, New Content! You and the community will progress in Battlefield 2042 through a Season system, which will continuously bring fresh updates to the game. Themed around new narratives, Seasons will bring content like Specialist soldiers, locations, weapons, and vehicles.